“Number of electrons in each shell

Each subshell is constrained to hold 4ℓ + 2 electrons at most, namely:

When each shell is filled up we have the family of inert gasses.  You can see them in the periodic table. 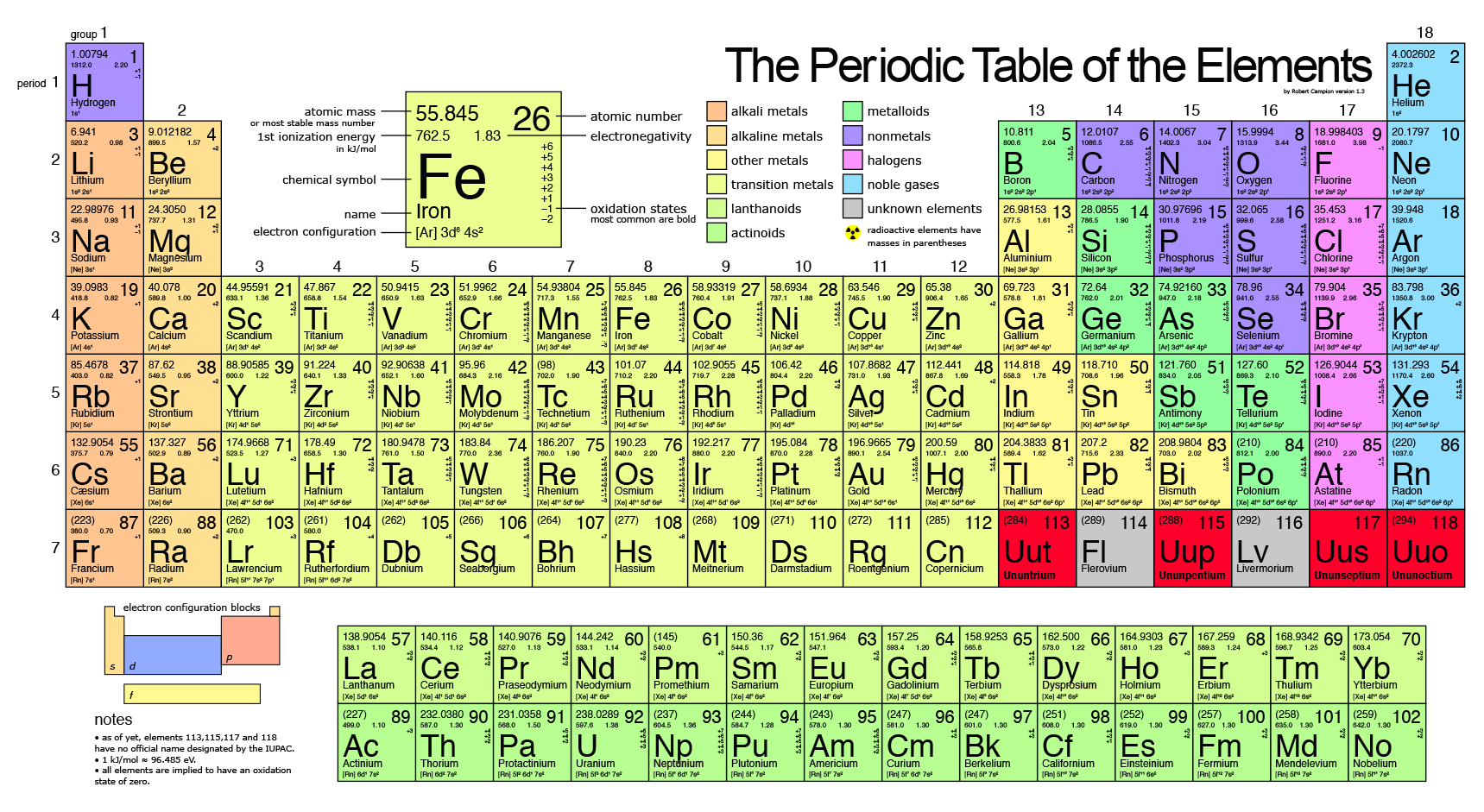 In a reducing environment, an electron-rich environment, some of the gasses that are not inert gasses will start acting more like them.  Its as if their electron shells will be filled out.  These elements will then tend to want to separate out from their chemical bonds.  One doesn’t want to be too absolutist about this. But the tendency will be there.

Elsewhere you will see me claiming that “up'” and “down” reverse as we head to the centre of the earth.  They may reverse once or three times.  If we follow matters upward from the earths surface we see that if the depth of the ocean were equalised all over we would have solids, liquids, then gasses, then gasses separated out by molecular weight, then an area of charged particles, essentially protons and electrons.  Which I think is what the Van Allen belts are all about but its hard to get confirmation of that.  Then there is space.  So it goes solids, liquids, gasses, protons, electrons, then space.

In my model something like this is going on as we go to the centre of the earth.  The difference is that thermal energy is trapped within.  So matters are happening at a very high temperature.  The order is solids, liquids, gasses.  But these gasses include pretty much all the elements.  Being as the temperature will be so hot.  Remember up and down are reversed.   So up is towards the centre of the earth well before you get to the gas stage.

The last layers are Helium, hydrogen, protons, electrons, space.  The space becomes a small gamma ray sun.  This is because the last two layers lead to charge separation, which leads to charge buildup.  Which leads to all pervasive negative charge.  And since this charge is so focused we have a kind of spontaneous plasma focus “machine” as it were.  Since its gamma rays in free space we have pair production.  Since we have such a powerful negative charge buildup we have easy fusion building of heavy elements.  I have made this claim before.  That fusion is easy and natural, but no energy spinner.  That it happens very easily in a situation of high charge buildup.

But while there is no air pressure right at the centre, further back in the opposite direction the gas pressure buildup is very strong.  So the hot gasses pierce DOWNWARDS (paradoxically towards the earths SURFACE) even though these gasses are lighter than the liquids then solids they are burrowing into.

Now these gasses will burrow down, until “up” and “down” are reversed and then they will get a bit of a boost in their attempt to make it towards the earths surface.  On the other hand as they cool they will liquify, solidify, and mix together.  But they won’t mix as well as they otherwise might.  Because of the pervasive negative charge environment. They’ll mix alright but not even close to as much as we would otherwise expect.

And so we get our earths negative electrical field and we also get ore grade magmas.  If heavy metals were only created in supernovae, as the ludicrous mainstream theory alleges, none of this would be possible.

Okay what is the alternative environment to the beginning of life that I’ve been banging on about as a corrective to the modern feebleness of evolutionary theory? The chemists find their theories of the origins of life to be pretty untenable.  But think of what is going on in the middle of Pluto? I suggest that pluto has started its new matter creation process. But its mostly hydrogen.  Smaller amounts of oxygen, carbon and other elements.  But mostly just hydrogen.  So you get the buildup of gasses at the centre, and this leads to these active volcanoes that NASA found on Pluto.   The liquid water comes out of these volcanoes, freezes as it is released and lands as ice on the ground.  Probably a lot of this ice will sublimate not having the atmosphere to keep it there but here I am speculating.

The point is you’ll have the reducing hydrogen heavy gasses, with a strong electron-rich environment, such that the normal laws of chemistry don’t apply. You’ll have the hydrogen biased gasses that are needed to spontaneously produce amino acids.  But on earth things have heated up too much in the middle of the earth.  So you cannot now have the interior of the earth as the place for the evolution of life.  But the water coming out of Pluto’s volcanoes may only be luke-warm, and largely driven out by gas pressure and not by heat as such.

So what we might have, throughout much if not most of the interior of Pluto, is the venue I’ve been banging on about, that could be conducive to the evolution of life.

So here what I’m saying is that primitive life evolves in proto-planets in the boonies.  Far away from a star.  It has to be in the boonies to keep the heat low enough for the process to continue for billions of years.  Abiogenesis has to go on OUTSIDE of the inner solar system of stars.  Then to get life on a surface of a planet, that planet has to come in from the cold somehow.

101 thoughts on “How The Earth Produces Ore Grade Magma/ The Mystery Of Abiogenesis.”